Now that the Holidays have subsided I have had some time to sit, reflect, and compose some words to update you all on what has been happening and to review how far we’ve come.

It has been one year since I first saw my special little house in person…January 12, 2014 to be exact. It actually took Rome and I a few weeks to get the showing arranged, as the seller had delisted the house after it struggled to sell, but after several phone calls and rescheduled meetings, we got in. Looking back at some records, I had actually begun researching the house’s history right around New Years, so I guess I have known her for little over a year now.

After months of various set backs on both the seller’s and my side, I closed with keys in hand on May 9, 2014. The summer and fall were a blur of activity with painting walls and ceilings in the majority of the rooms (still have the master bedroom, bathroom, and kitchen left), landscaping, freaking out over and then repairing water damage, refinishing the hardwood floors, dumpster diving (picking up off the curb) for furniture, rewiring and cleaning light fixtures, and then moving in. Throughout all this activity I started to get to know my neighbors much better…a few of them stopped by during one of the weekends Kit and I were landscaping out in front and thanked us for working so hard to beautify the community (definitely gave me the warm-fuzzyies). I can’t wait to show you all some more in depth photographs when everything comes into bloom this year.

A rare Japanese maple cultivar that I paid too much for, along with the menagerie of daylillies, echinacea, oat grass, english rose, and blackberry lily among others should make for quite the show. Of course this is only the start, as those ewes will meet their maker this spring!

We never did end up getting around to having enough money to reroof the garage or rebuild the chimneys, so those are a top priority for 2015. However, to stave off additional deterioration of the garage roof, my dad and I successfully secured a tarp over it (don’t worry its silver, not blue) during our holiday break. Before setting the tarp I endeavored to remove as much of the moss build-up on the north slope as I could. When I finished the pile of moss running along the back wall of the garage was nearly a foot deep. Not to mention I uncovered a 2″ diameter hole in the roof.

This was after the vast majority of the moss had been removed. It began to snow soon after so I do not have a photo of the garage sporting its silver tarp, but it has held through a couple of major wind storms so far and you barely notice it from the street.

Over the past few months I’ve begun the process of stripping paint from the dining room furniture and kitchen cabinetry. As Kit and others might tell you, I have house ADD where I jump from one task to the other, but I am determined to stick to the task. I have stripped woodwork before at my parents house, so I am not a total novice. They have gorgeous cypress exterior woodwork which is absolutely jaw dropping when its stained. Since I am doing the work inside, I have been using environmentally safe paint stripper teamed with a respirator. I cannot stress how dangerous it is to not use the proper protection when doing this type of work especially when employing more intensive processes like methylene chloride paint stripper or using a heat gun. The California Department of Public Health has a very helpful list of various paint strippers and their dangers seen here. The process for the cabinetry has involved two rounds of stripper application followed by clean up with soft wire brushes and mineral spirits. After the paint is removed the pieces are lightly sanded with a fine grit sand-paper to prepare them to be refinished. Kit and I are still debating how to proceed with the finish. we are torn between traditional white/off-white painted cabinetry or stained cabinetry, ala-1910s butler pantry. However, one piece of the original cabinetry that will definitely be stained is the surprised discovery after I peeled a second layer of vinyl sheet off the counter top…the original solid oak counter. It is literally one single piece of oak, no seams I kid you not, roughly 2′ by 5′!

Kit and I, not content to take a breather, have also been finding/creating work for ourselves with furniture related endeavors. We finally made the decision to ditch the twin bed and upgrade to a full size mattress to go with our great antique mahogany bedroom set (did I mention we got it for $75?). The set was made by the Curtis Furniture Company in Jamestown, NY. Their motto was “Solid Mahogany, No Veneer”…and I believe it after hauling it upstairs this summer. I had not considered that our bed frame did not have slats to help distribute the weight transferred through the box spring to the frame, nor that the box spring would actually sit on top of and not in the frame. So…after having the original thick box spring swapped for a slim one and building a frankenstein support system stitched into the frame were we able to rest assured that we would not immediately crash to the floor upon trying to lie down on the mattress.

We also bought our first nice piece of furniture…a “lawyer’s” bookcase. It is quartersawn oak, is modular, stacks, and has glass front doors which swing up and out of the way. It makes a great venue for pottery and old books, and almost as importantly gets our great lamp by Allan Ditton up off the floor…as we had nowhere for it to go for months. He is one of several great upstate New York potters who we have been able to purchase pieces from. The coppery/greenish/white crackled raku piece is by Paul Harp who teaches ceramics at the Memorial Art Gallery.

You may not see it right away but the bookcase is actually made up off five separate modules. So in theory, we could find more shelving units and stack it higher.

We were also flabbergasted when my parents surprised me with an amazing birthday/christmas/house-warming gift…which has yet to arrive because its being made as we speak…a limbert library table made by Stickley Furniture Co. I absolutely adore Stickley furniture and their commitment to the highest quality. They are not joking when they say they are making heirloom furniture. Unfortunately with Kit and I just starting out with this whole house thing, and not being in particularly lucrative professions, Stickley furniture is a distant dream…although we have perused a number of antique shops looking at 100 year old Stickley furniture because window shopping and dreaming is free! 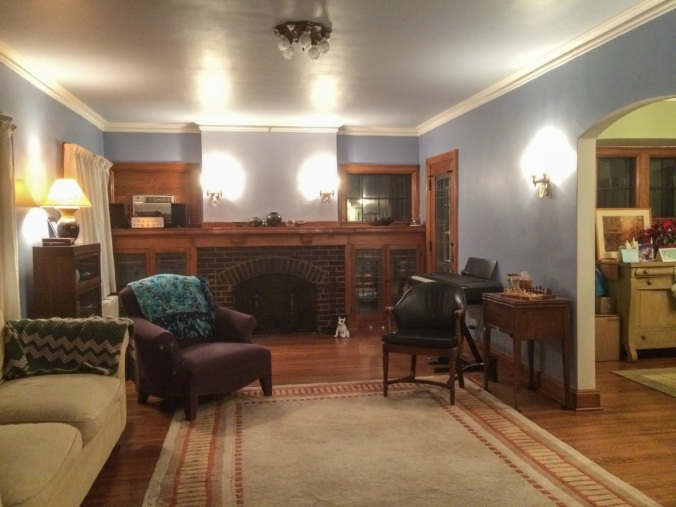 So here’s the old living room layout. That black leather chair on the right was another curbside snag. It’s also about 80 years old and was made right here in Rochester!

…and here’s the new living room layout waiting for the library table to be placed behind the couch. Kit and I both really like the heightened focus it lends to the fireplace.

On the more historical side of things, several little discoveries and surprises have happened in the past few months. I have been in communication with the daughter of the Stadtmuellers (third owners of the house from 1941-1982). I feel so grateful that she and her family reached out to me and have shared several great stories about the house. I look forward to having them visit sometime in the future, and sharing some of their stories with you in later posts.

On November 20th this perfect little money pit became an official designated landmark of the Town of Irondequoit! I am glad that the Preservation Commission (of which I am a part of) saw the historic value and importance the house holds with its unique history of being a Master Model Home. Now, presumably, long after I am gone it will remain protected for the enjoyment and education of others. Hurray!

Last, but not least, as part of my efforts to pursue individual listing on the National Register of Historic Places for My Perfect Little Money Pit, I have been compiling all the articles written about the house during and after its construction. The count has reached 19 articles in total, including a brand new one I did not know about until it dropped from the sky last month…an article in the December 1928 issue of New York Central Railways Magazine. It is so fascinating that rail passengers throughout the state and beyond got to read about my little house…not to mention the article contains a complete set of accurate floor plans and the best complete photograph after construction had finished I have seen. In fact as I type my final draft nomination is being reviewed by a few close friends and colleagues before I submit it to the State Historic Preservation Office for initial consideration. 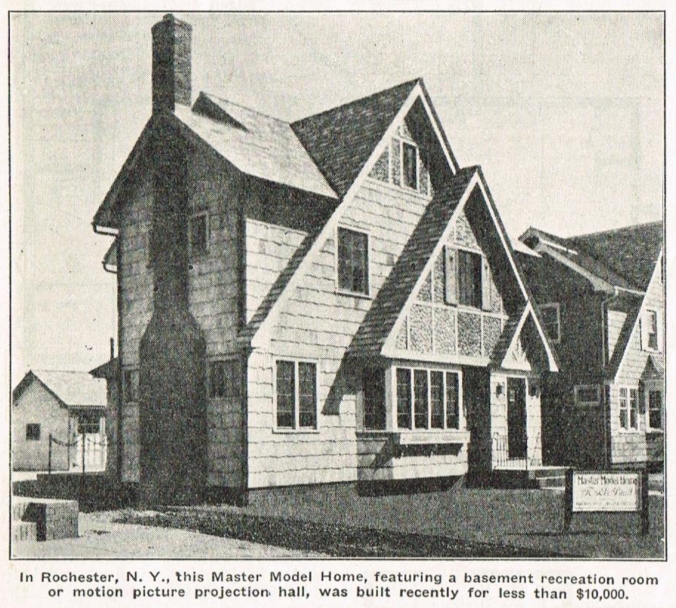 We will of course rebuild the decorative shutters and flower box that went missing sometime after 1928. Not to mention the garage doors!

Now that I have been forced to do it with the National Register nomination and the possibility of a lecture this spring/summer, I will do my best to convey the complex and rich history of MPLMP to you all in the next post. Until then, thanks for reading…and stay warm!